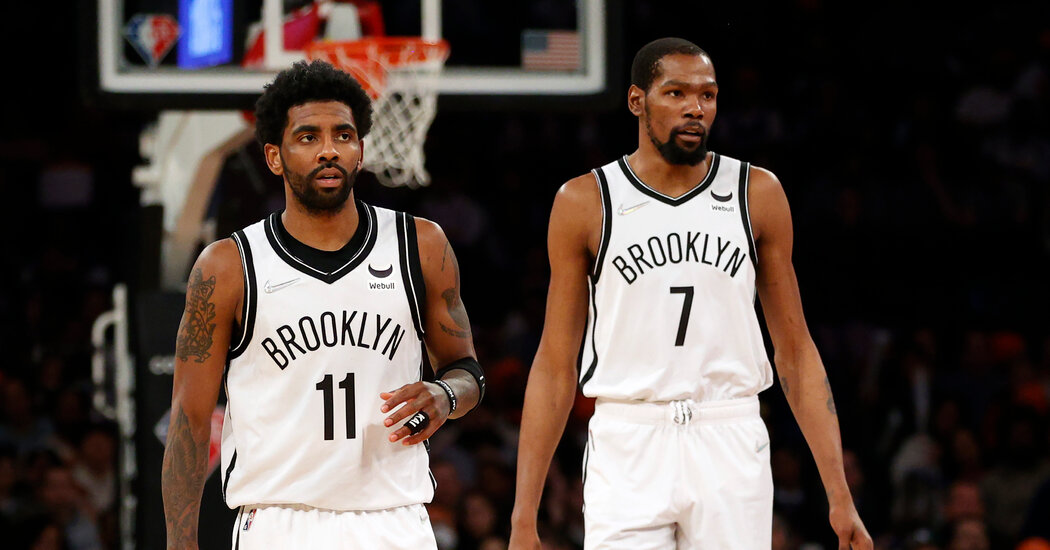 Kevin Durant and Kyrie Irving were expected to become the Nets’ instant title contenders when they joined the team in 2019, bringing two of the NBA’s best offensive talents to a team that had just finished sixth in the Eastern Conference.

But three years later, with no championships or final appearances for the Nets, Durant and Irving spoke Monday about a difficult offseason that at times seemed like it might end with both playing for other teams.

In June, Durant, 33, requested a trade, which he said Monday was due to uncertainty and accountability issues in the organization.

“I want to be in a stable place and trying to build a championship culture,” Durant said. “So, I had some doubts about that.”

Even though his trade request came just days after Irving and the Nets couldn’t agree to a long-term extension, Durant said that wasn’t a factor.

Instead, he pointed to the Nets’ 11-game losing streak while injured last season as a worrying sign about the team’s direction. At the time, he didn’t want his concerns to affect the team’s play on the floor, he said, so he waited until the offseason to make his trade request.

“That’s what was putting doubts in my mind, is that when adversity comes we can continue to overcome it?” Durant said. “I’ve been on championship teams. I’ve been on teams that have been on the verge of winning a championship, and they did those things. So, I want to be part of a group that did that.”

He added: “Winning and losing, I can handle all of that. I’ve been in the league for a long time. So it’s not just a result. It’s how we got to that point. And I didn’t feel like we were getting to that point.”

in August, the athletic reported that Durant had told the Nets to choose between keeping him or keeping general manager Sean Marks and coach Steve Nash. The report prompted Nets owner Joe Tsai to issue a statement of confidence in the Nets’ leadership. “Our front office and coaching staff have my support,” Tsai wrote. “We will make decisions in the best interest of the Brooklyn Nets.”

On Monday, Marks said: “That’s professional sports, right?” And he added: “Everyone is entitled to their opinions. And I think on our part, it’s not to hold a grudge against what Kevin said, but it’s almost like: Okay, that’s how he feels. What’s going on here? Like, what do we need to change?

Nash said he didn’t take it personally. “This is not new to the NBA,” he said.

“Kevin and I have known each other for a long time,” said Nash, who worked with Durant at Golden State as a team consultant. “So, you know, families go through things like this.”

The Nets purchased Durant from other teams, but on August 23, Durant and the Nets announced that they had “agreed to proceed with our partnership.”

Durant said he wasn’t disappointed or surprised to return to the Nets: “I know I’m so good they’re just not going to give me away.”

Before the Durant trade saga began, there was the matter of Irving, whose contract negotiations and unwillingness to get vaccinated against the coronavirus dominated headlines for much of last year. Irving said he felt like the Nets had given him an “ultimatum.”

Irving, 30, was eligible for maximum contract extensions worth up to $245 million, but he and the Nets couldn’t agree on one. Instead, Irving opted into the final year of his contract, which will pay him $36.5 million this season. He said he had other options, but not many, and decided that staying in Brooklyn was the best option for him. Irving played in just 29 regular-season games in 2021-22, primarily because he was ineligible to play at home due to local vaccination mandates.

Marks said not reaching a contract agreement with Irving was due to reliability, not Irving’s anti-vaccine stance.

“There’s no ultimatum here,” Marks said as Nash sat down next to him and nodded. “It’s about wanting people who are trustworthy people, who are here, responsible, all of us. Staff, players, coaches, whatever. I’m not going to give anyone an ultimatum to get vaccinated. That is a completely personal choice. And I support Kyrie, and if he wants to, he has made that decision. That is his prerogative entirely, and I totally understand that.”

While the Nets were dealing with Durant’s injury and Irving’s absences last season, they were also affected by the unclear status of guard Ben Simmons. Amid tensions in Philadelphia early last season, the 26-year-old Simmons was traded to the Nets for James Harden in February. Simmons, who said he was dealing with a lingering back injury and mental health issues, has never played a game for the Nets.

He seemed close to getting dressed in the first round of the playoffs, when the Nets faced elimination against the Celtics. “That day I was supposed to play Game 4, I woke up on the floor,” Simmons said Monday. “I couldn’t move, I could barely walk.”

Simmons had back surgery in May and said he was cleared to participate in training camp, which begins Tuesday.

“I’m excited to play with these guys,” said Simmons, who hasn’t played an NBA game since Game 7 of the 2021 Eastern Conference semifinals with the Sixers. “I think it’s a good opportunity for us and we have a lot to prove.”

Share
Facebook
Twitter
Pinterest
WhatsApp
Previous articleOath Keeper Accused of Jan 6 Attack Texted Andrew Giuliani About Election
Next articleMilitary families are on the move. How to be a neighbor of Blue Star
RELATED ARTICLES
SPORTS

Gazprom, Russia's state-owned energy giant, has threatened to cut off remaining gas supplies to Europe due to a legal dispute with Ukraine's state gas...
Read more

A group of 50 House Democrats and Republicans is asking President Biden to share with Congress the text of a possible deal with Iran...
Read more

Rachel Hilliam, president of the Alliance for Data Science Professionals, says it is unusual for societies like the Royal Statistical Society (RSS), the BCS...
Read more